So, it’s taken us a couple of days to work out how to write this news after the International Property Awards ceremony at the Savoy Hotel, London last Friday. Even saying the words ‘The World's Best Single Office Estate Agency’ is surreal, so it’s hard to put pen to paper and tell you all! But it wasn’t a dream, we won.

Firstly, we represented the UK and British Islands to win against other European agents then, rather astonishingly, we won the highest accolade of all to win our category in the International finals and become the World's Best Single Office Estate Agent of 2021/22.

It's hard to believe that the Jersey office of our Channel Island company could be named the best in the whole world, but it’s true. But who gave us this accolade and what does it mean? To bring some perspective to the awards, we’ve taken time to explain a little further how it all unfolded.

In the summer months before the submission deadline, our CEO spends a good month collating our year’s achievements - across sales, lettings, statistics, figures, imagery, marketing campaigns, notable achievements, and PR - into bespoke entry portfolios. The portfolios have grown a lot over the years as our story has evolved and each book is now circa 500 pages per category entered - all uniquely designed in-house. As you’ll be aware, our design and publication production stems from Simon's background as an award-winning brand designer so although time-consuming, it's a cathartic and productive time to look at where we are and where we want to be. At the initial stage, you pay to enter the awards and fight for your placing within your own community.

The panel of judges for the International Property Awards is large (more than 100 people are involved in judging the entries) and includes professionals from a variety of backgrounds. The awards are judged by leading figures from all aspects of the property industry including architects, designers, journalists, academics, estate agents and industry bodies - including the former group chief executive of the National Association of Estate Agents and global property standards director for the Royal Institution of Chartered Surveyors (RICS). Each region may have up to three judging sessions.

Entries are scored according to how well they answer the questions and meet the criteria in the entry pack. Their judges will also apply their own experience to assess the quality of designs and aesthetics where relevant.

Scores are then analysed to determine winners. Only those scores meeting the necessary levels and quality will be awarded. For each category and country, there may be up to one Five Star winner and up to three Award Winners - from thousands of entries.

Each region across the globe has an official presentation event.

This includes business networking activities with fellow winners, together with a glamorous champagne reception and gala dinner. Awards are announced to a room of hundreds of people within the industry and winners are called to collect their awards. This year, Livingroom won five awards - each being the highest scoring possible Five Star award in the initial stages;

Things don’t end there though… The best Five Star winners at country level go on to compete at regional level.

This is where it gets interesting for us at Livingroom. We are just a small Channel Island agent, born on a kitchen table in Simon’s home - so although we’ve always been ambitious, this stage of the awards has always been primarily a benchmarking exercise for us as we find out how we fare against multi-national corporations and huge multi-practice networks. Safe to say, we are not only representing our company but also the islands that we call home - making sure that people see how proud we are of Guernsey and Jersey by putting them on the map.

This meant that Livingroom were solely chosen to represent the UK and British Isles in the Single Office award - competing against all European agencies.

Livingroom were invited to London for a two-day event, starting with an intimate dinner at the House of Lords hosted by Lord Caithness, Lord Waverley and Lord Best, for the winners so far. This ‘once-in-a-lifetime’ opportunity for Simon was without question an incredible experience and included a tour of the Royal Palace - particularly memorable as the House of Commons was sitting as international events were unfolding in Russia and Ukraine.

On the morning of Friday 25th February, the European heat of the awards was held at the Savoy Hotel, London. The Lancaster Ballroom was a glamorous backdrop for the next announcements and an opportunity for winners to represent their countries. Livingroom, representing the UK and British Isles (including our beloved Channel Islands), were re-evaluated by the judges against all European entrants and were presented with the accolade of Best Estate Agency Single Office Europe. This jaw-dropping moment was a huge highlight for our CEO as Livingroom was recognised against such tough and wide-ranging competition from across the continent.

Following on from the European awards at The Savoy, Livingroom qualified to represent the UK, British Isles and Europe against the rest of the world - Africa, Asia Pacific, Arabia, Canada, Caribbean, Central & South America and USA.

It was at this stage that Livingroom was awarded the top-level industry accolade of Best International Real Estate Agency Single Office - for the World. A truly phenomenal feat for a small Channel Island company but proof that anything is possible if you work hard, believe in what you’re doing, and strive to be different.

Livingroom is astonishingly proud to stand tall alongside industry giants and those that we have always looked up to for inspiration.

The brilliant Knight Frank brings global power and more than 488 offices across 57 territories. The astonishing Cushman & Wakefield is among the world's largest commercial real estate services firms, with reported revenues of US$7.8 billion in 2020 - operating from approximately 400 offices in 60 countries with circa 50,000 employees, managing in excess of 4 billion square feet of commercial space. New Zealand property giant Barfoot & Thompson has 75+ branches, over 1,500 salespeople, and specialises in residential, commercial, rural and lifestyle property, body corporate management and projects. The company has property managers in over 60 New Zealand branches and a portfolio of more than 17,000 rental properties. South Africa's finest, Pam Golding Properties, was founded in 1976 and is the largest and most prestigious real estate group in South Africa, with over 300 offices in sub-Saharan Africa and overseas. Liz Hogan is consistently ranked as one of the top-performing agents in South Florida - The Wall Street Journal/Real Trends has ranked her Top 10 for the State of Florida and #100 in the nation for the last several years.

Then there was Livingroom, a small agency, born in the Channel Islands on January 26 2006 - now operating with 32 staff covering just two islands we are fiercely proud to represent.

Why Jersey and not Guernsey?

'Livingroom have consistently provided quality entries into the awards for the last decade. Livingroom demonstrate how a smaller agency can clearly compete with multi-national and international agencies: through the quality of their stand-alone offering, their clear sense of identity, and their innovative spirit. This year, there was a hair’s breadth between Livingroom’s Guernsey and Jersey offices in the judging process but we felt that the Jersey office deserved to be recognised for its incredible success in just over three years from opening. As a result, the judges have awarded Livingroom the top-level accolade of Best Single Estate Agency Office for the World. Well done Livingroom, myself and my team are proud to see you achieve such amazing success.' 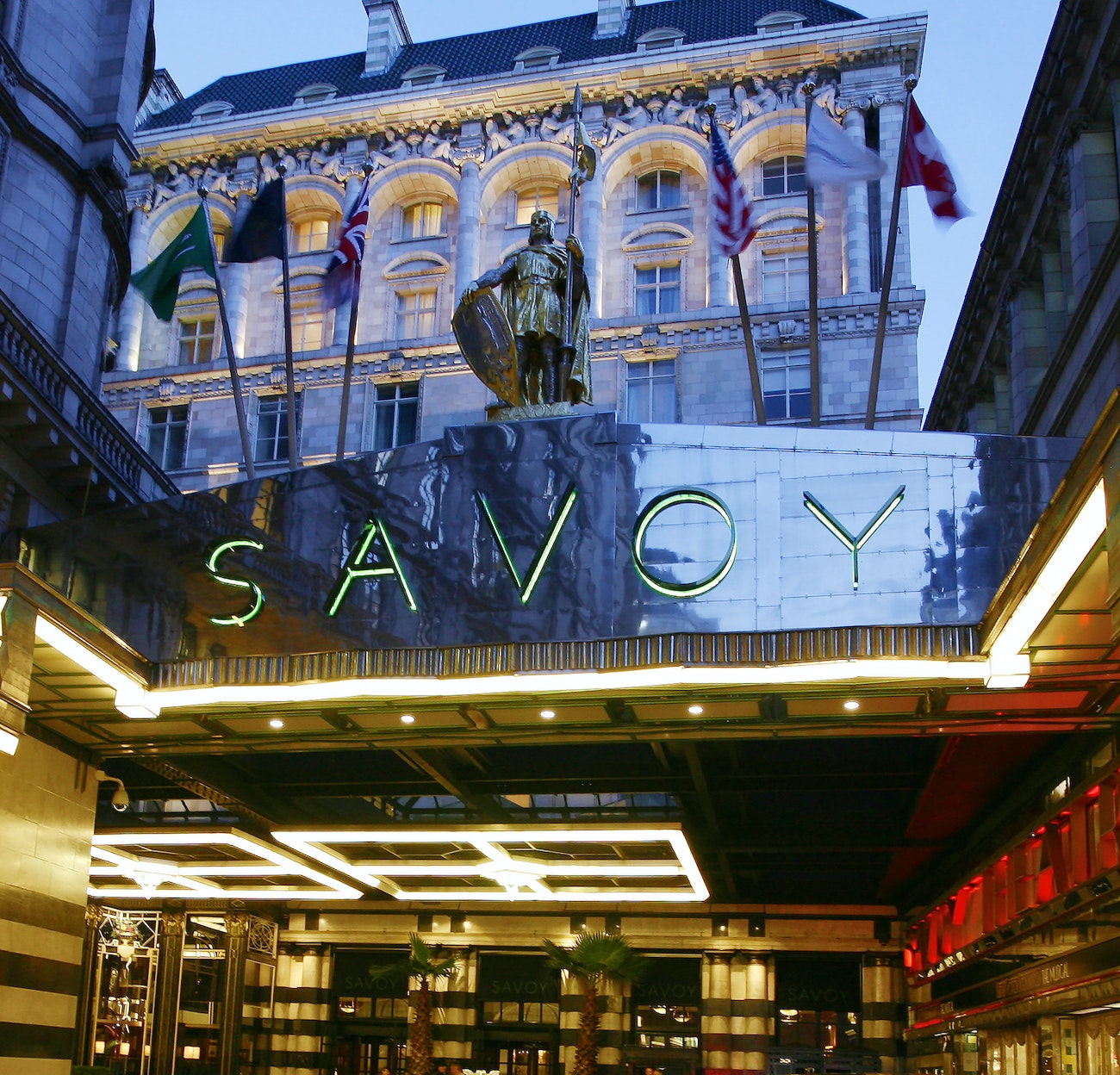 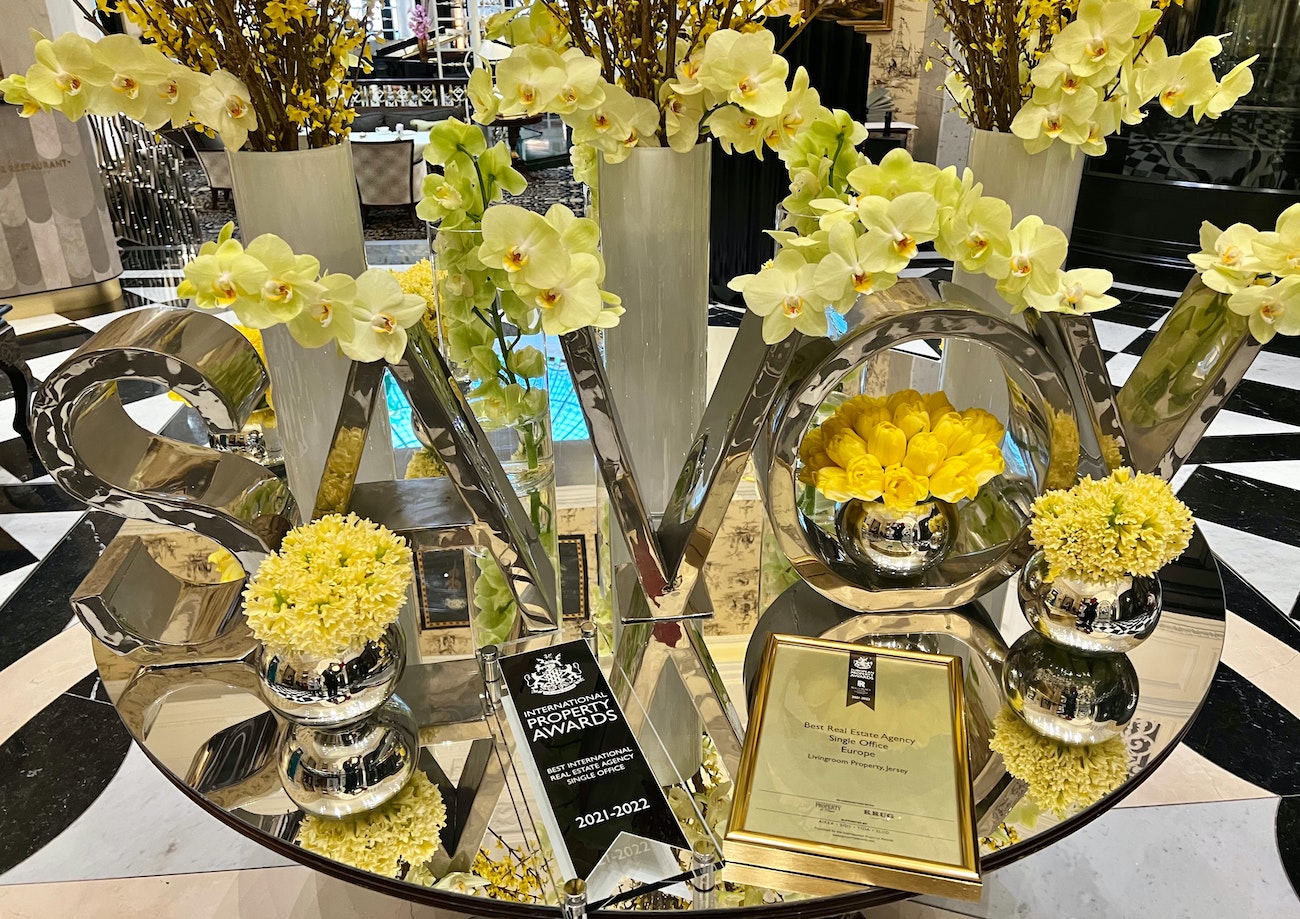 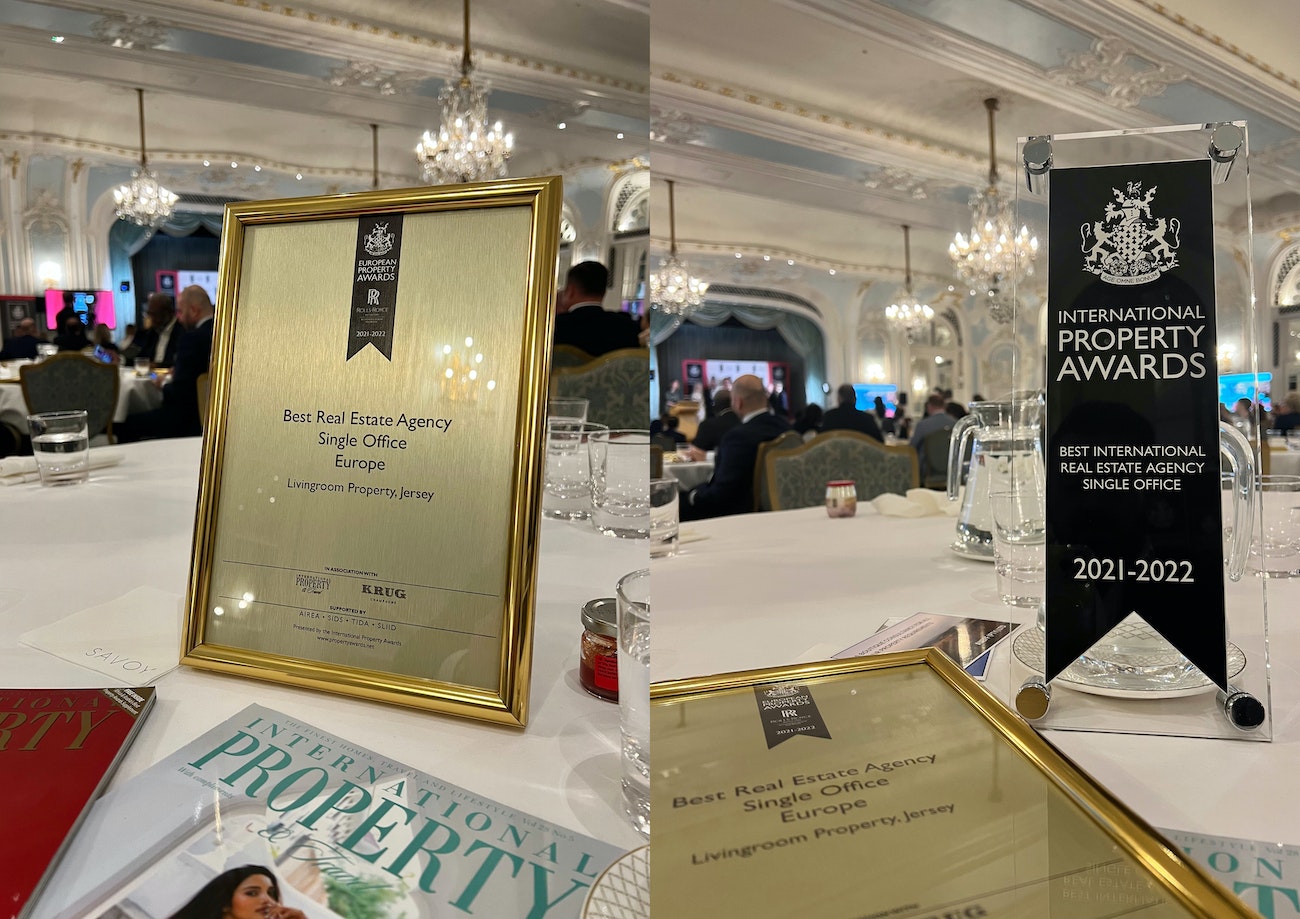 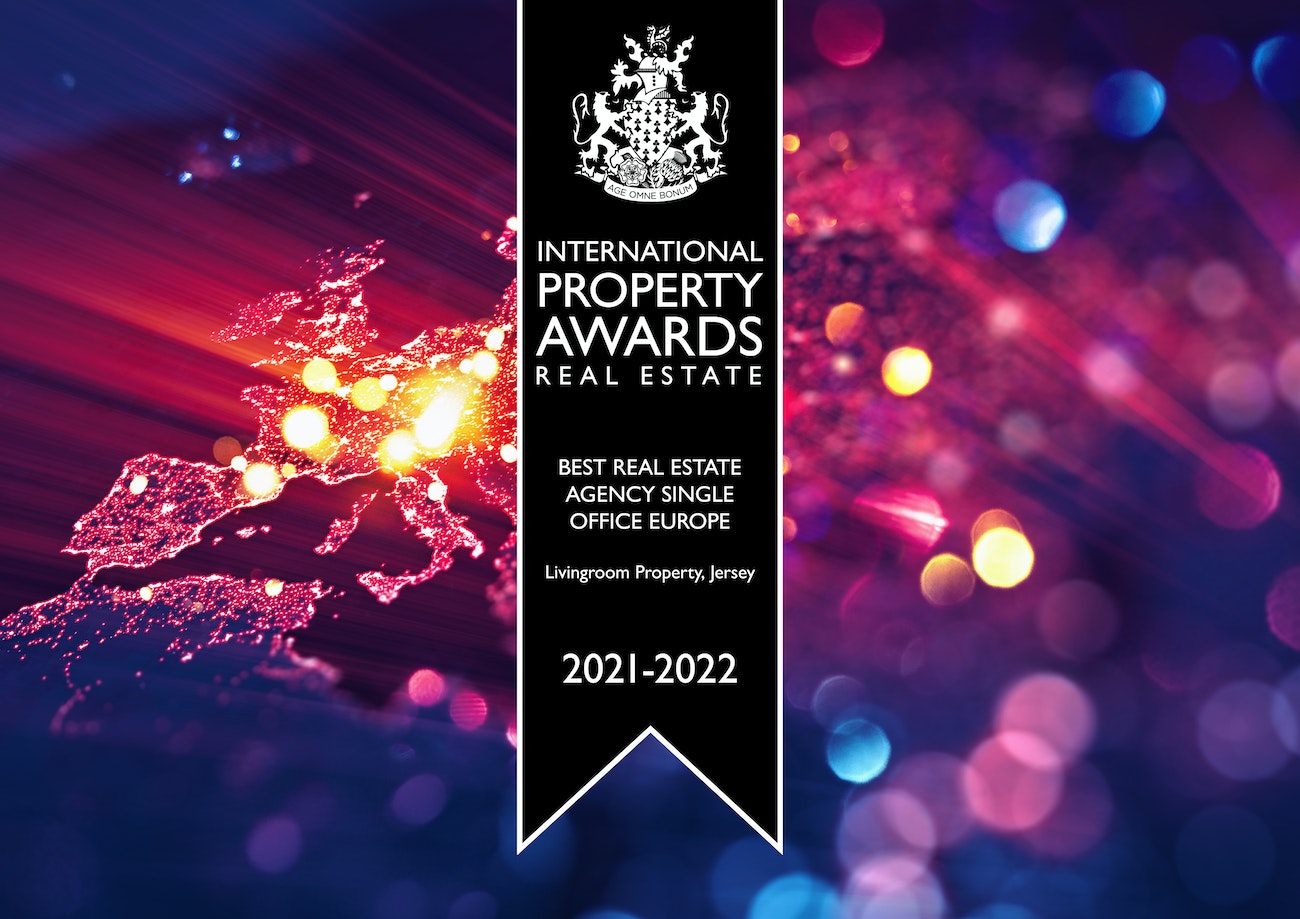